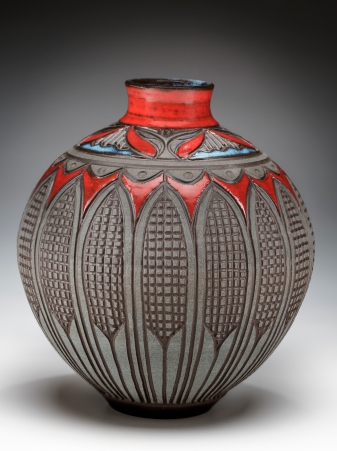 Each piece of stoneware from LA Pottery is hand-crafted solely by the artist, Larry Allen. His inspiration for his designs comes largely from African and Native American art. Larry makes each vessel from a special black stoneware clay through multiple glazings and firings. Most of his pieces involve delicately carving designs into the surface of the wheel-thrown vessel.

Larry Allen has worked as an artist for the past 35 years, honing his wheel-throwing and glazing techniques, all the while ceaseless in his enthusiasm for stoneware and the infinite possibilities of his craft.

Larry Allen was born and raised in Birmingham, Alabama. He received a BA degree in Art from Berea College in Berea, Kentucky in May 1978. Larry has an art studio in Leeds, Alabama where he resides.

In 2007 one of Larry’s vases was presented on behalf of the Alabama State Council on the Arts as a gift to Pulitzer Prize winner and author, Harper Lee.

In 2008 his work was showcased on the nationally televised HGTV show “THAT’S CLEVER”. Also in the same year one of his vases was given as a gift to Liberia’s first woman president, Ellen Johnson Sirleaf.

Larry also has been featured on the BrightHouse Cable television network, giving demonstrations of wheel-thrown pottery.

In addition to developing his unique, inspired pottery creations, Larry teaches pottery classes and travels for exhibitions. Larry displays his work throughout the year in numerous art festivals, mostly in the central and southeastern United States.

Larry’s stoneware also can be found for purchase the Parkway Craft Centers in North Carolina, The ZuCot Gallery in Atlanta, Georgia and the Christine Linson Gallery in Fairhope, Alabama.

He welcomes your interest in his work and encourages you to contact him regarding commissions, exhibitions or special teaching assignments.

One thought on “Larry Allen, Pottery”