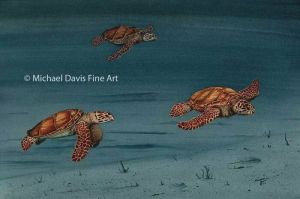 Michael Davis is a watercolor realist inspired by the beauty and timelessness of the southern landscape. His passion for nature is reflected in his many paintings of the southeast from the mountains of Tennessee and North Georgia to the Gulf Coast.

Although he began painting in oils when he was young, he quickly developed a love for the beauty and detail he could capture with watercolor. Influenced by the works of Hubert Shuptrine, John Carlson and Wayne Spradley, Michael has spent his entire career developing his unique style of realism with watercolor. While his current works in acrylic offer a new dimension to his artistic vision Michael remains primarily a watercolor realist. After years of offers and requests to share his knowledge of watercolor painting he is taking some time away from his fine art exhibitions and shows to teach his techniques of realism through watercolor in the Birmingham area.

He has been accepted into numerous juried art shows and exhibitions and won many awards. In 2012 his Realism in Watercolor Solo Exhibit was featured at the Hardin Cultural Arts Center in Gadsden, Alabama, the Fine Art Gallery at the LJCC of Birmingham and the Leeds Arts Council Gallery in Leeds, Alabama. He was a participant in the 2012 Energen Art

Competition in which his painting “Autumn on the Bayou” was purchased for their permanent collection. Solo Exhibits for 2013 included the Art Gallery at Hoover City Hall, Amicalola Falls State Park in the North Georgia mountains in October as part of their Visiting Artist Series and a Solo Exhibit at Brookwood Medical Center in Birmingham. Recently his paintings were on exhibit at the 2014 Energen Art Competition, the 2014 Alabama Wildlife Fine Art Exhibition, the 56th Annual GAA Fine Art Exhibition at the Gadsden Museum of Art and the SAAG National Juried Art Show in Blue Ridge, GA. Michael’s watercolor and acrylic paintings were featured at the Rosenzweig Art Center in Columbus, MS in July 2014 and he returned to Amicalola Falls for a Solo Exhibit in October 2014.

Among his many awards are the People’s Choice Award Award at the 56th GAA Fine Art Exhibition at the Gadsden Museum of Art, Best in 2-Dimensional at the 2014 Fountain City Art Festival, Best in Show at the 2012 Eufaula Art Show, Hoover Arts Alliance Award at Art in the Gardens 2011, Hannah LeMaster Watercolor Award in Arts Alive 2011, Best of Show in Painting at the 2011 Fountain City Arts Fest, First Place Watercolor in the 2010 Hoover Shelby Art Association Show and Best of Show in the 2009 Vestavia Art Association Show. Michael is a member of the Mountain Brook Art Association and the Over the Mountain Plein Air Painters of Birmingham. His paintings are in private and corporate collections throughout the South.