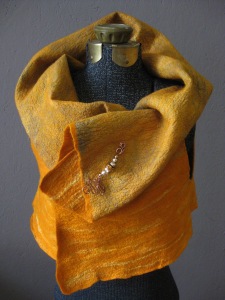 Kami Watson is a free-spirited Fiber Artist who uses both Traditional Wet Felting and Nuno Felting to create Fiber Art-to-Wear and home décor.

Traditional Wet Felting, thought to be one of the earliest textile forms, is the process of turning raw fibers into felt through the intensive labor of washing, carding, and dyeing wool, layering the fibers, and adding soap, water, and agitation to force them to interlock together. Nuno (“fabric”) Felting is a contemporary twist on the traditional technique and consists of wet felting fibers into an already established lightweight fabric.

Kami uses wool from her family’s farm in Virginia; as well sources select fibers elsewhere. She dyes her own fibers and fabrics to allow for color exploration and works primarily with wools and silks, but will also incorporate other fibers, textiles, and treasures into her designs. She enjoys experimenting with color, design, and technique, and each of her pieces is individually crafted and one-of-a-kind.

Kami learned her craft from her mother, also a Fiber Artist, primarily when she would land back at her parent’s small farm, in between international development, humanitarian, and conservation jobs. Kami would help in her mother’s studio and at juried shows in exchange for room and board. She would use the skills taught to her by her mother, as well as other art forms, as education tools while an AmeriCorps VISTA, a Peace Corps Volunteer, and an Outdoor Educator.

In 2009, Kami took a job with the American Red Cross and deployed to Iraq where she and her husband would first briefly meet. Their paths crossed again several years later in Afghanistan, and upon their return to the States, they relocated to the Huntsville, Alabama area, unpacked their storage boxes, and got married. In spring 2014, Kami transitioned into a new career as a full-time Fiber Artist. She opened a studio at the Flying Monkey Arts, 2nd Floor South, Lowe Mill ARTS & Entertainment complex in Huntsville, began doing juried art shows, teaching workshops, and settling into a more permanent life, as an artist in Alabama with her husband and their dog.